In Which I Give the McRib a Fair Shake 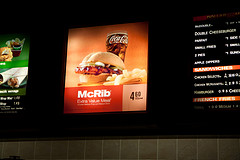 It’s fair to say that the McRib is almost universally reviled, isn’t it?

And there’s still a part of me that longs to fit in with the cool kids, so I am reluctant to admit this and presumably face public scorn (much like T said he would never volunteer to do the Volkswagen Shoot-Out at Madison Square Garden because he wouldn’t want to be booed by an arena full of Rangers fans). But, as I discovered on Consumerist, the Web makes people braver and/or meaner, so I suppose I can cower behind my laptop as I say this: I used to really like the McRib.

And whenever McDonald’s brings it back, jokes abound and I hold fast to my secret shame and pray no one asks, “Have you ever tried it?”

But it’s been YEARS…and I was admittedly curious whether my tastes had changed or if – horror of horrors – I still secretly liked the McRib.

And I wasn’t actually going to even *do* it until I came home from work the day after mentioning this fleeting thought and T said, “I have a surprise for you!”

So…I’ll say this – there are definitely worse things out there, even on the McDonald’s menu itself. (Namely, anything with American cheese and/or eggs. Like, say, an Egg McMuffin. Shudder.)

And, call me Snooki, but…I really liked the pickles – it could have been my imagination, but I think they were more substantial than the usual McD pickles.

I think the slab of meat is a little weird – especially for something that is supposed to emulate its namesake. And that hunk of faux rib meat may be what gets everyone in a tizzy. But, at the same time, I don’t think it’s all that much different – read: grosser — than the hamburger patties that everyone gobbles up – it’s just a slightly different shape. The texture’s comparable, folks.

And I don’t know if I agree with McDonald’s claim that it is “tangy temptation” – I don’t think it was particularly tangy…or even overly BBQy. It was almost – dare I say it — somewhat bland.

And it would have been a lot better if the onions had been, say, caramelized instead of served raw.

In short? I think the McRib gets an overly bad rap. It’s not the best sandwich on the menu…and it’s certainly not as good as, say, the Carl’s Jr. Western Bacon Cheeseburger…but, for those of us on the eastern half of the country, it may be as close as we get for now.